Opened in April 2019, and based in London’s most popular foodie paradise, Mimo London Borough Market is the new and utterly exciting cooking experience. The fun, vibrant team at Mimo specialise in regional Spanish cuisine (as well as other worldly cuisines) and their Tapas workshop has to be the best way to sample the very best of Spain. With a whopping SEVEN courses to make using Gaggenau appliances, the Tapas workshop leaves you with masses of foodie ideas, Gaggenau knowledge and a very full stomach! 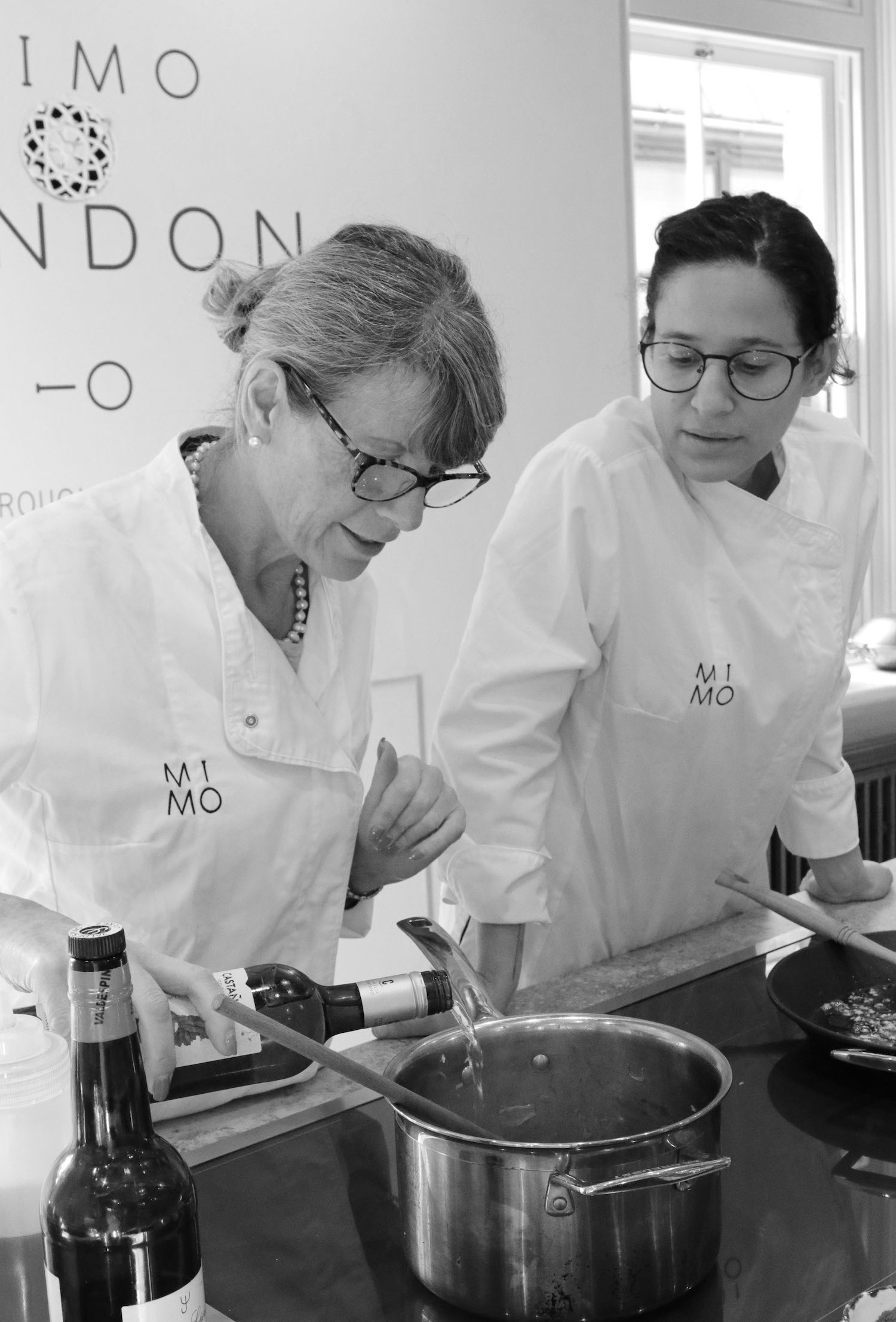 Our day began with a stroll through the already bustling Borough Market which was speedily setting up for another busy day. Mimo is located on the far side of the market by the docks just a short stroll from London Bridge underground station. With a prompt 10am start we met our host for the day who explained we were going to be making seven courses in the five short hours we would be there; all of which are inspired by different Spanish regions. 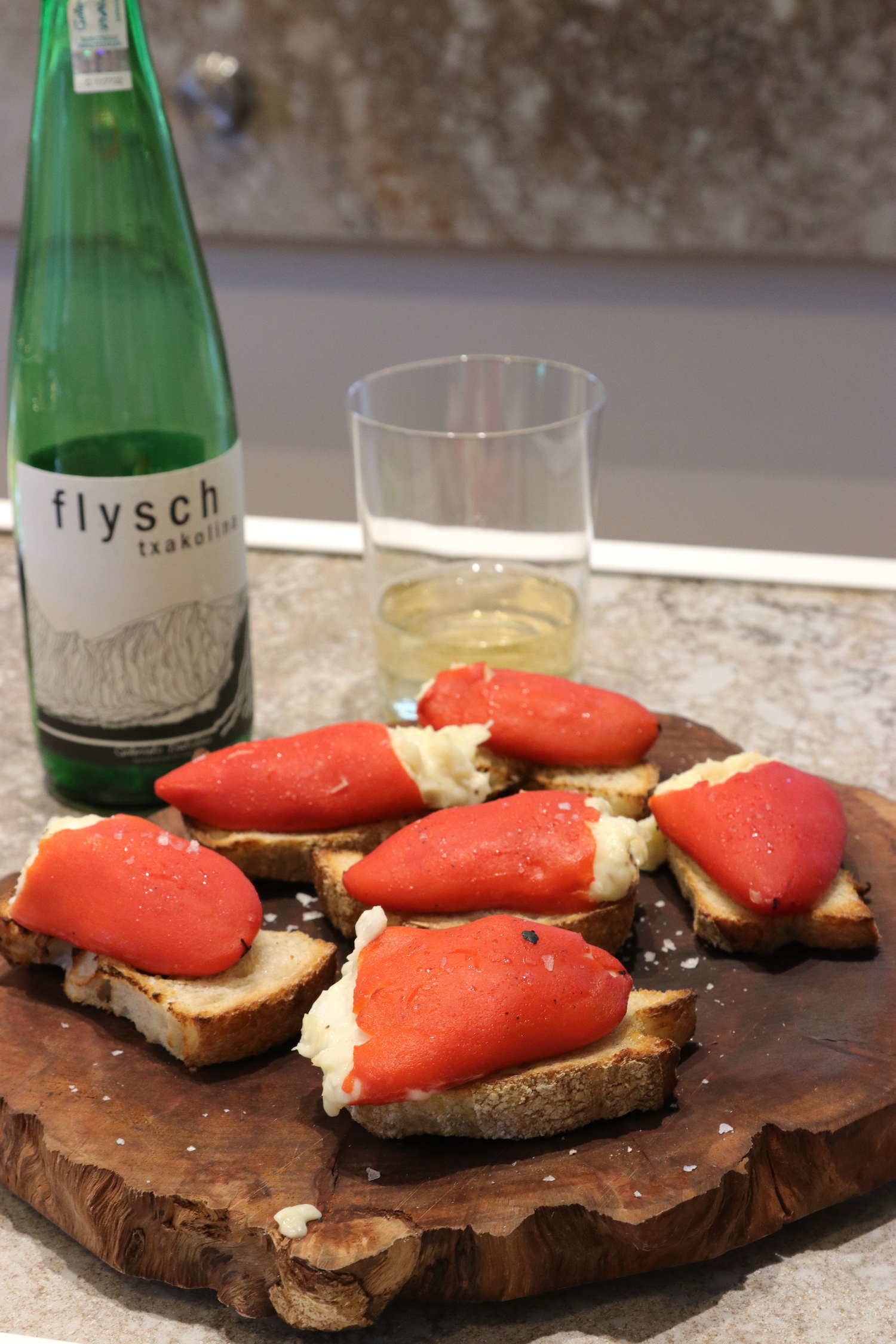 The first to be ready for testing was the Cod-stuffed Piquillo peppers (pictured above) which were super easy to make (once you know what your doing of course). Using a simple roux recipe of butter, flour, milk, shallots, garlic, bay and seasoning we made the perfect base for the tender cod fillets. Once cool enough to handle, the mixture is carefully spooned into Piquillo peppers (out of the jar and drained) then cooked in the oven on a high temperature for 5 short minutes. These were served with a glass of Flysch, which is the only wine produced in San Sebastian. Taste-wise, it’s a perfect marriage of wine and cider and was simply divine with the cod stuffed Piquillo’s. 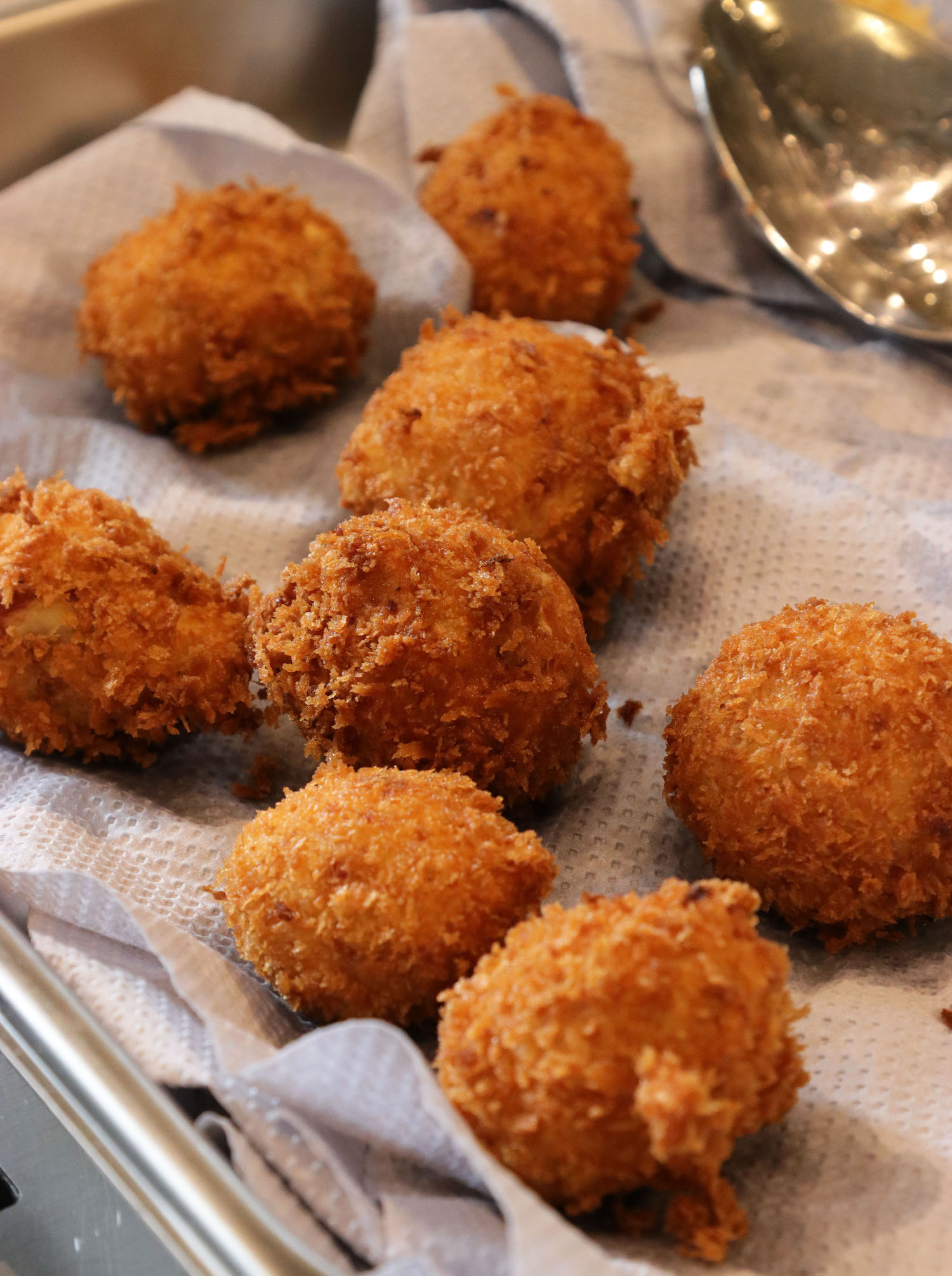 Croquetas de Jamón are a classic that almost everyone has tasted at some point in their lives, but when made from scratch there’s just no comparison. The initial mixture was a simple pan of milk, butter, flour, shallots and once this was thickened, we added ibérico ham. Once cooled (for at least 3 hours) the mixture is simply hand rolled into small balls then coated in flour, dipped in egg then rolled in Panko breadcrumbs and deep fried for a very short amount of time until golden in colour. 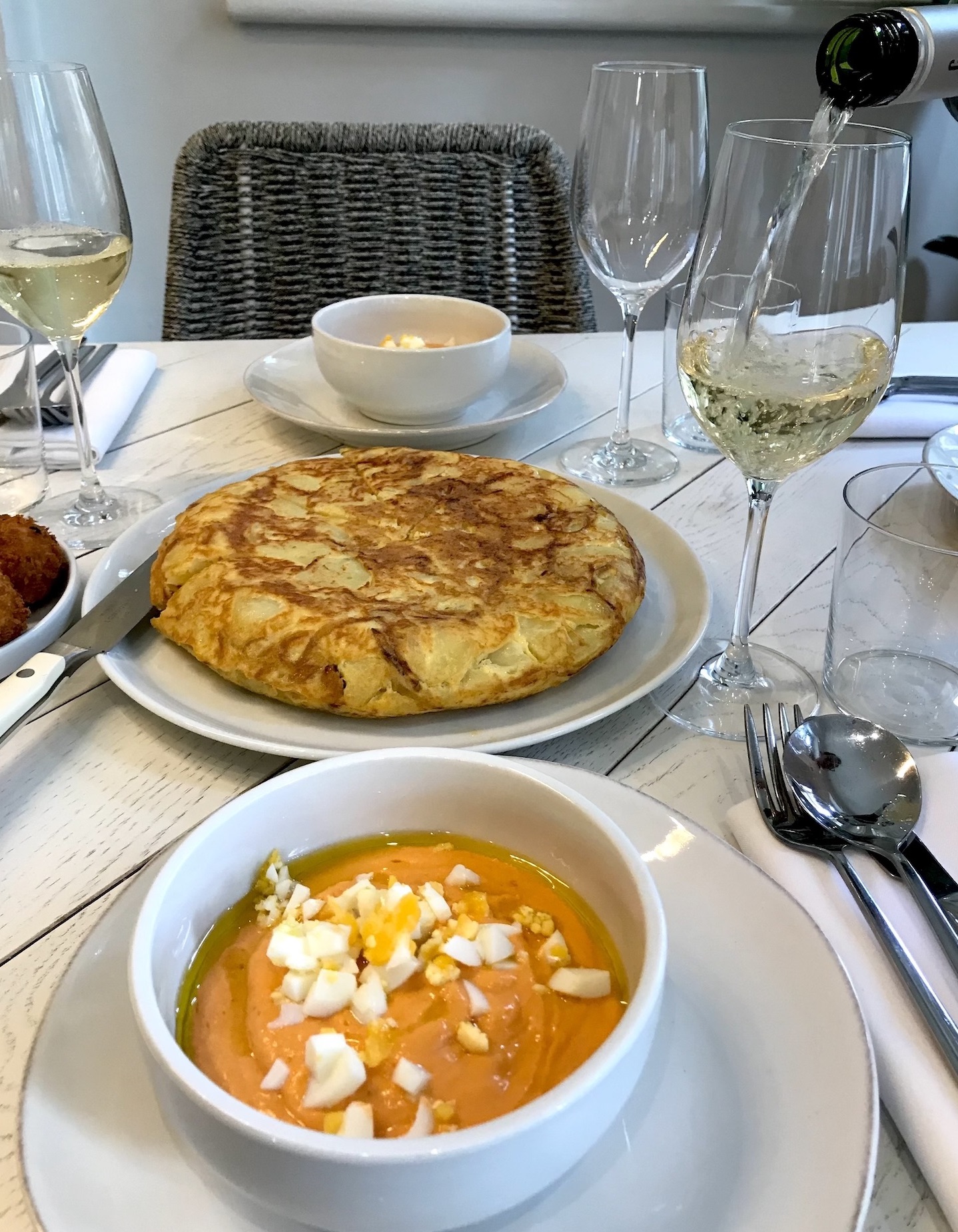 Whilst one of us worked on the Croquetas, another worked on the Spanish omelette and Salmorejo (a type of regional gazpacho). The Spanish omelette was a simple recipe of cooked thinly sliced potato, eggs, onion and seasoning which cooked slowly on the hob whilst preparing the Salmorejo. If you’ve not tried Salmorejo before we thoroughly recommend it. Thicker and more substantial that gazpacho, it is a combination of ripe tomatoes (the sweeter the better), crusty bread (we used the white sourdough from Bread Ahead just round the corner to Mimo), garlic, sherry vinegar and garlic. Then blend until smooth.

We served the Salmorejo into small bowls, then topped it with chopped boiled egg. That’s it! It’s such an impressively simple dish. Before we knew it we had three delicious tapas dishes to sit and enjoy with a glass of organic white wine before we moved on to the final three dishes. 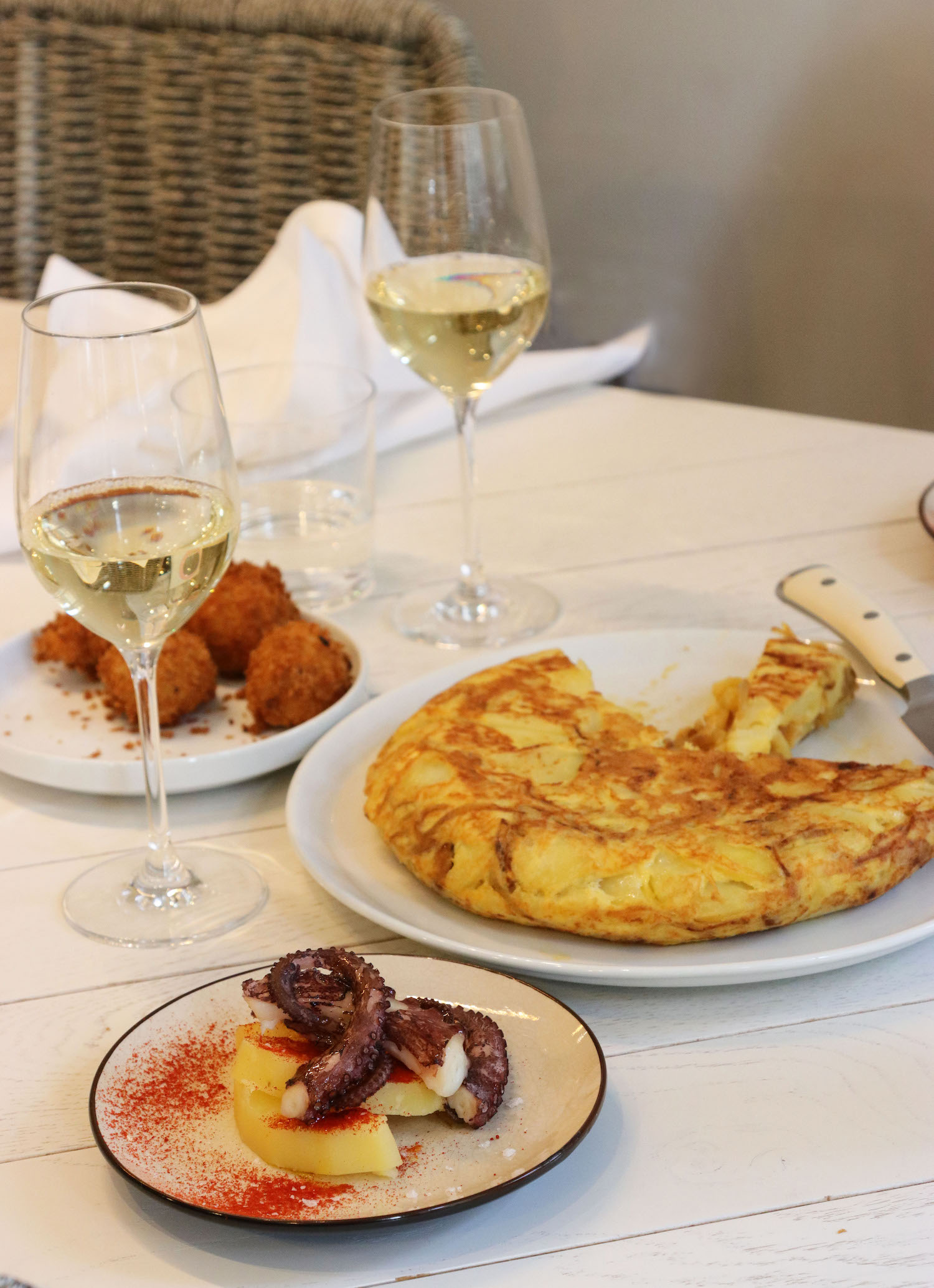 The final three courses consisted of a seafood paella with squid ink, Galacia style octopus and for dessert – crema Catalana (one of our favourites). The longest and most interesting dish to make had to be the Glacia style octopus (pictured above) – here’s what we did:

The dish is best made by freezing a whole fresh octopus then defrosting to tenderise. Once thawed, simply heat a large pan of water over high heat until boiling then dunk the octopus quickly into the water three times before leaving it in the pot to boil. While the octopus is cooking put another pan on to boil potatoes in. Once the octopus is tender, remove and allow to cool slightly then crisp off in the oven before serving with sliced potato, paprika and salt. YUM! 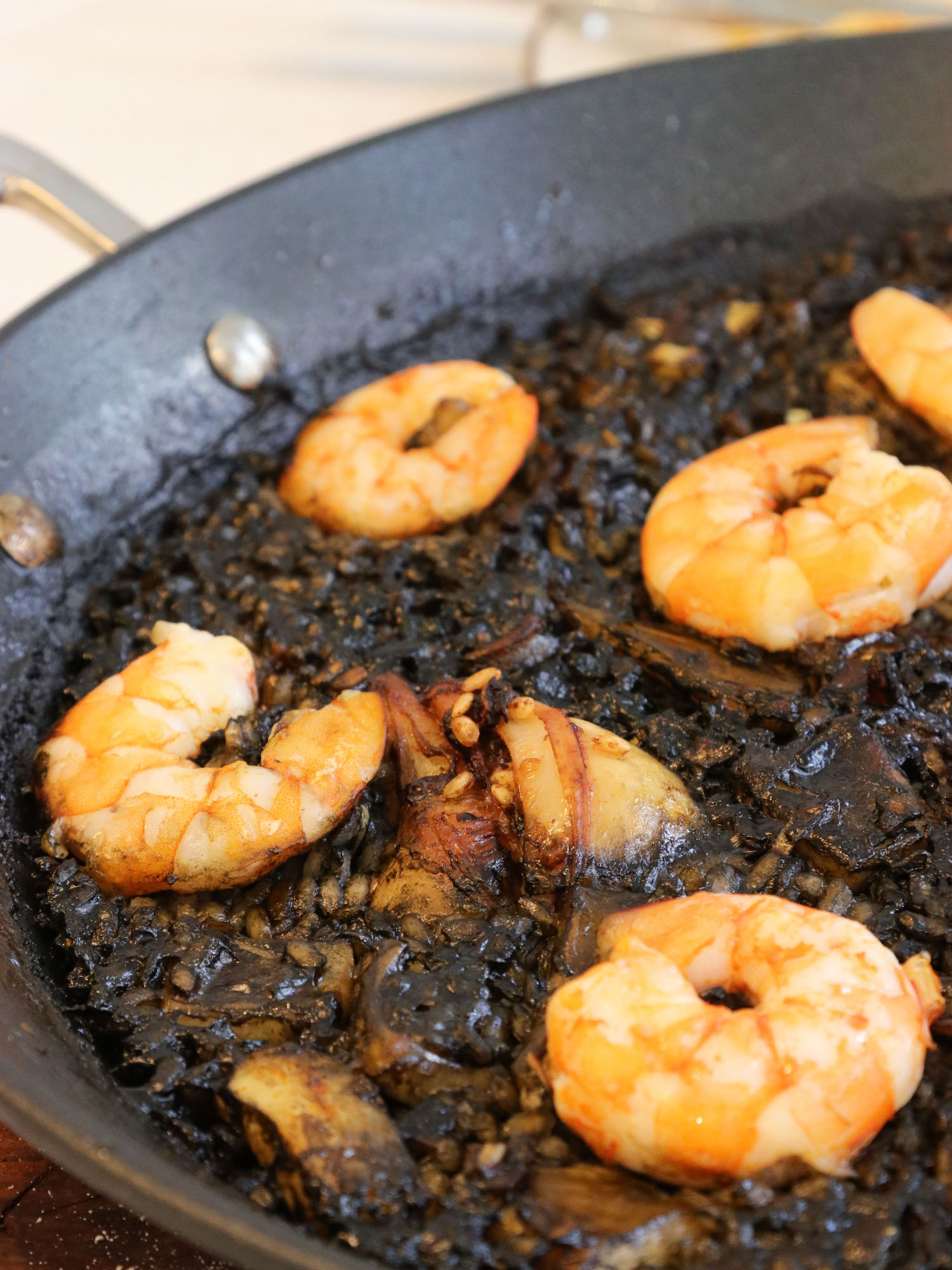 Our 6th and last savoury dish was black seafood rice. Made in a similar way to good old fashioned paella but with a twist – you add squid ink! (Dish pictured above). 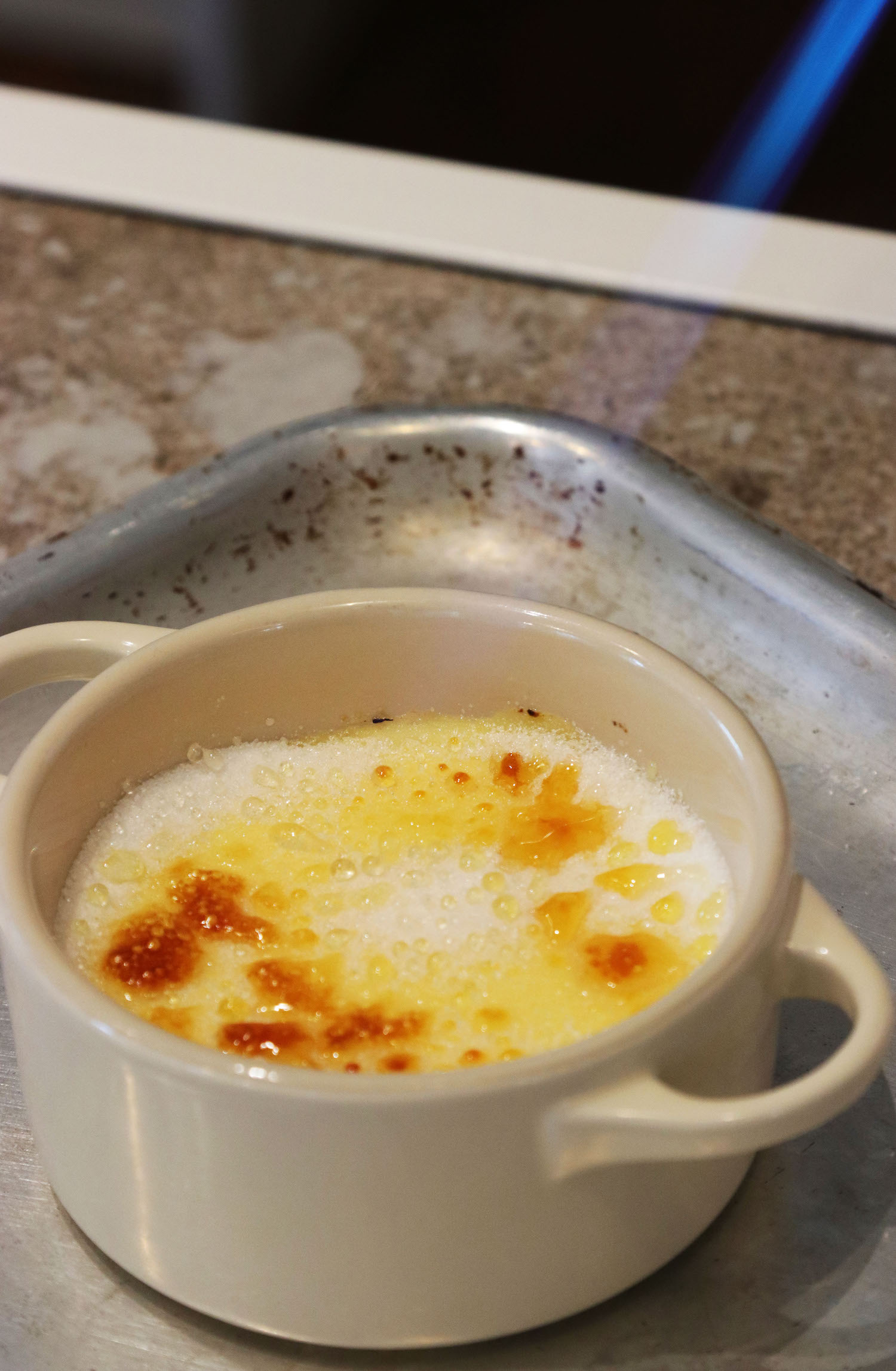 We ended our foodie feast with the Crema Catalana, a Spanish version of creme brulé made with whole milk rather than cream. We prepared these earlier in the day to set before adding the finishing touch of the crunchy sugar topping. All we did was sprinkle a tablespoon of caster sugar on top, smooth it out so it was even, then slowly and carefully blow torch until golden (not as easy as it looks on TV!). Once cooled we tucked in and quite simply couldn’t eat another thing.

To book a place on one of Mimo’s brilliant workshops click here, or for information on the Chef’s table dinners (which we have only heard great things about) click here.