Distinctive and beautifully balanced, Haramoun organic olive oil is is grown exclusively on a single estate under the snow caped peaks of Mount Hermon, Lebanon. 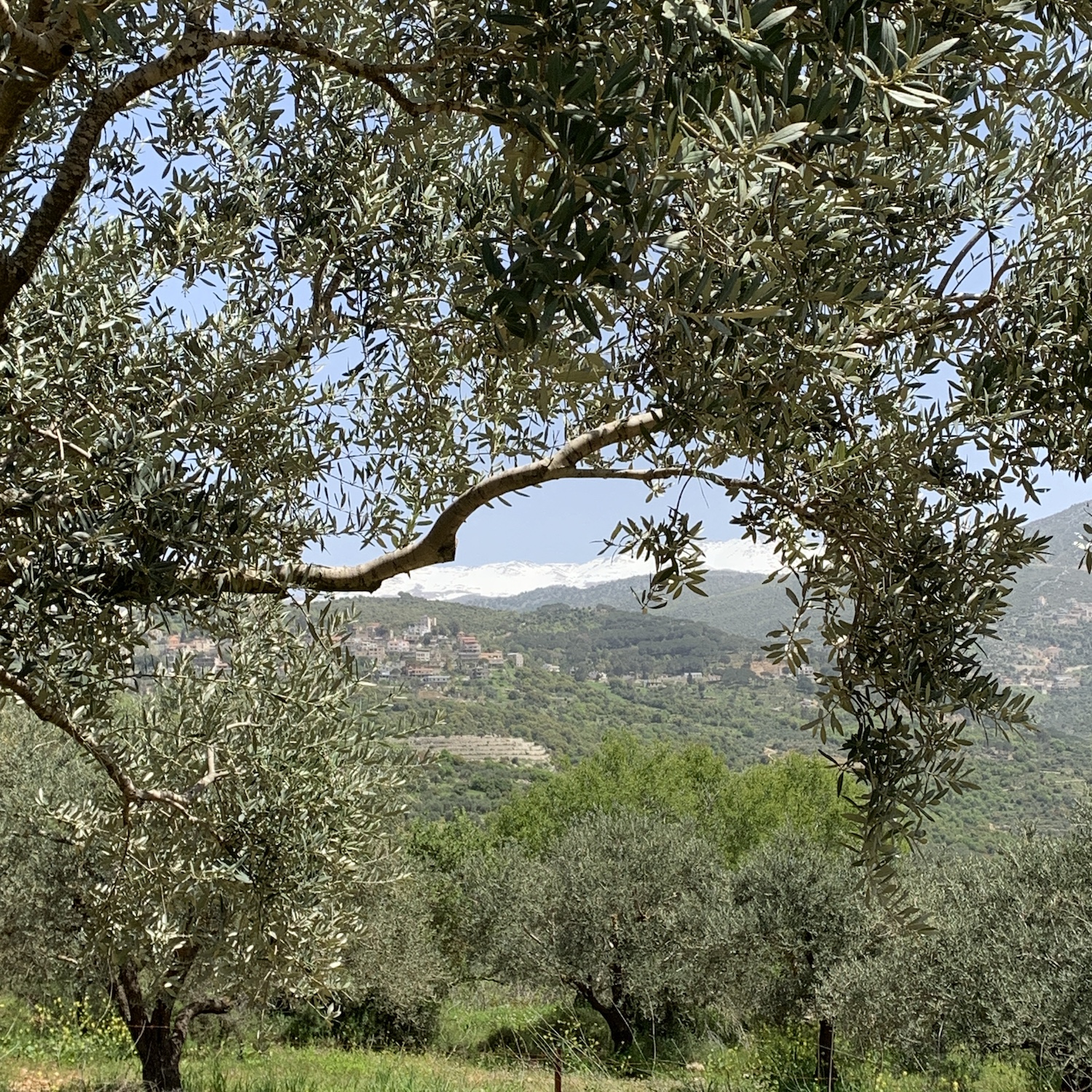 When you think of olive oil, your mind wanders almost immediately to Italy or perhaps Greece, however Lebanon grows some of the finest olive oil in the world. Lebanese olive oil is always at the centre of Lebanese cuisine, however many in the UK would not have had the opportunity to either taste nor purchase it. For over 5,000 years the oil of the olive oil tree has graced temples and tables across the Levant and served different purposes in various ancient cultures.

In ancient Greece for example, olive twigs were used to honour soldiers while the Romans considered the olive tree sacred that anyone found to be cutting it sentenced to death or exiled.

In Lebanon’s Baalbek temples, olive oil was offered to the gods after a good harvest. The sixteen ancient olive trees in Lebanon known as “The Sisters” are thought to be as old as 6,000 years, making them among the world’s oldest living trees that still bear fruit. A Millennia ago, Phoenician traders spread the olive tree around the Mediterranean. But while other countries in the region produce the majority of the world’s olive oil today, the olive remains at the heart of Lebanese culture, with its oil being indispensable to Lebanese cuisine.

A wonderful bi-product of its topography, fertile land and idyllic Mediterranean climate, Lebanon is well known for its superior olive oil. The land which Haramoun is grown on is nestled between mountain and sea in a pristine, natural ecosystem which favours more traditional, organic farming methods. 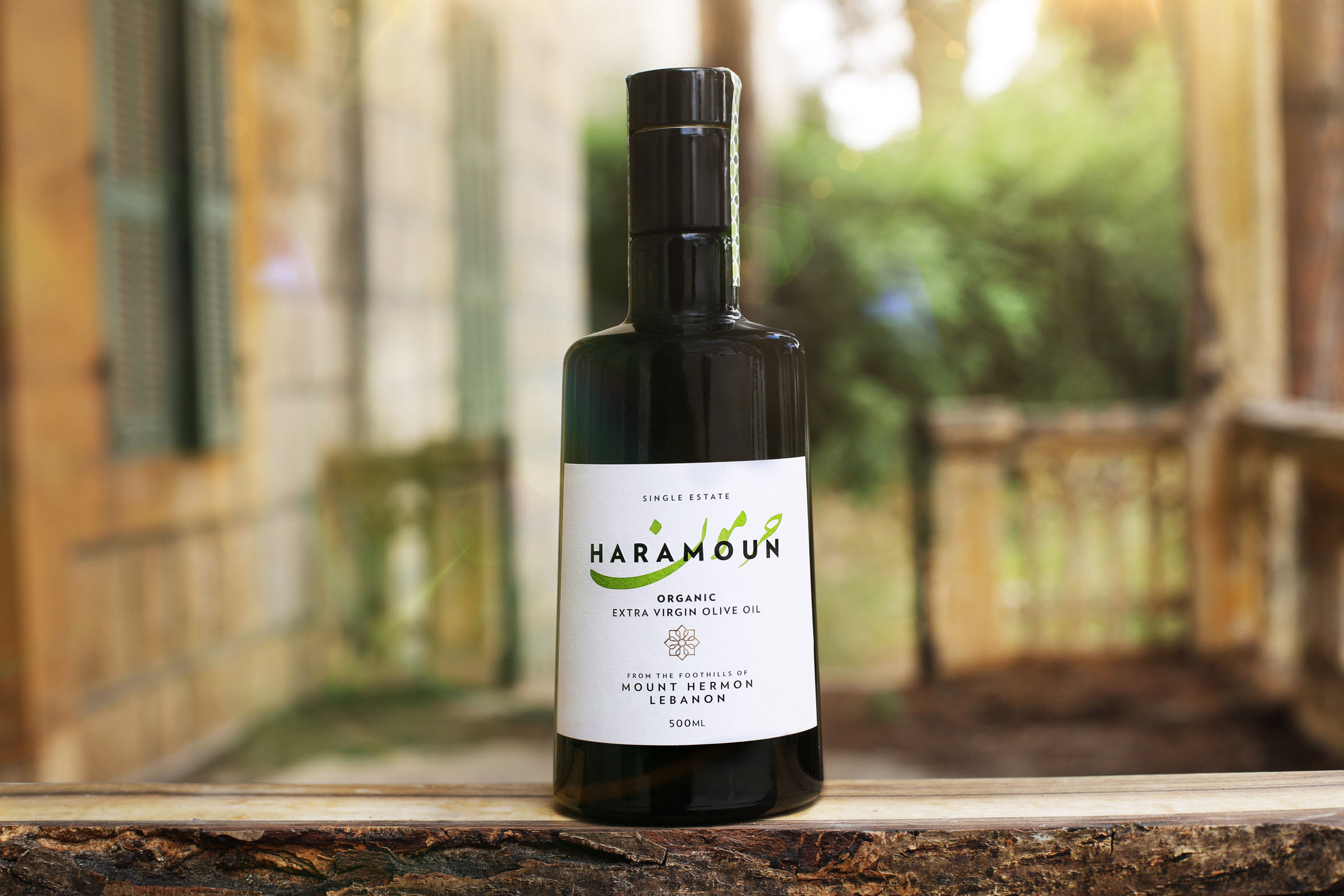 What does Haramoun taste like? The distinctive flavour is warm and pepper with almond skin bitters and the aroma is reminiscent of sweet and fruity apples and pears, with spicy rocket and citrus fruits. 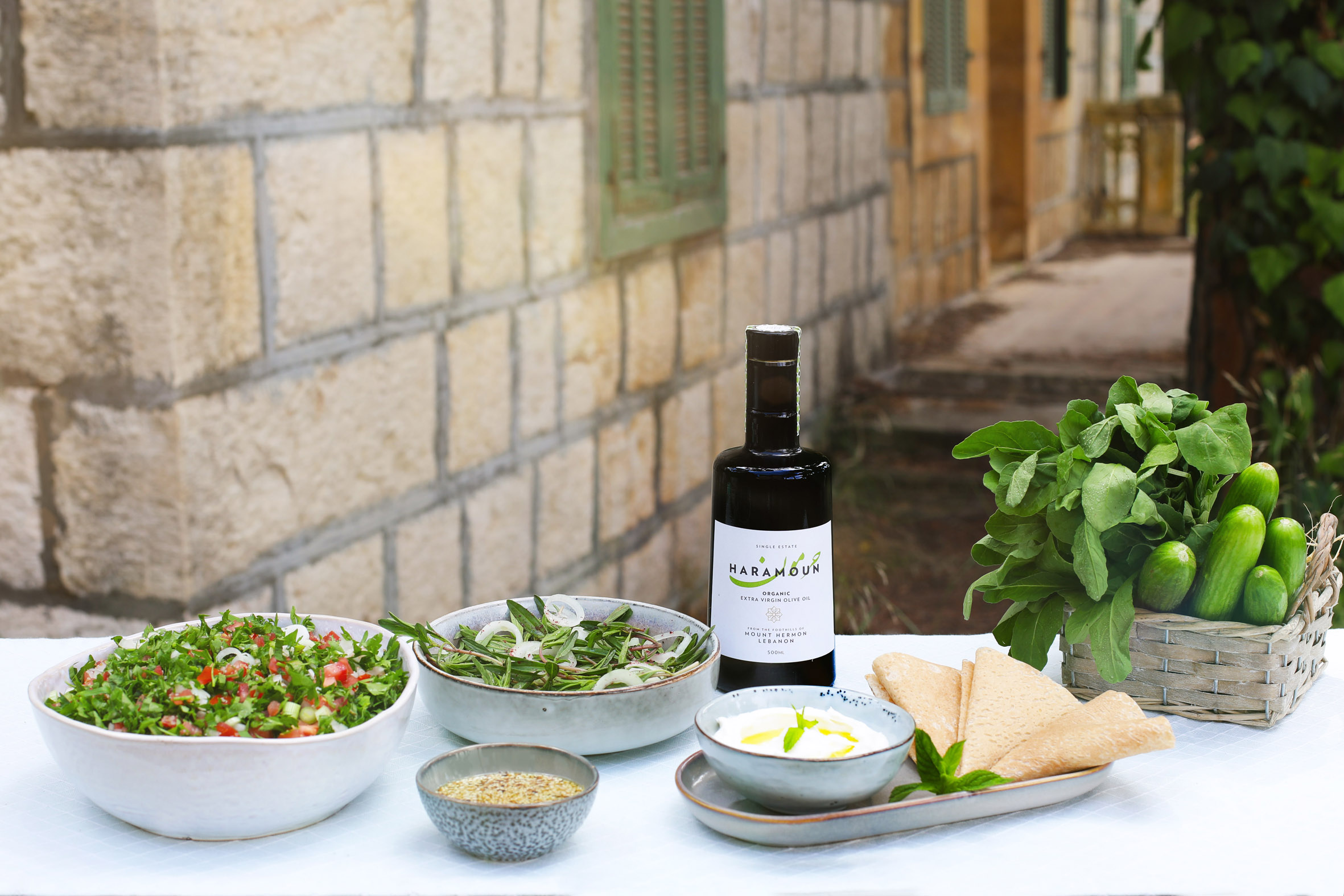 Versatile and balanced, this delicate olive oil would be delicious drizzled on a salad (warm or cold), with bread, over a freshly grilled white fish, as a dip, in cooking or quite frankly anything else you usually enjoy olive oil with.

Haramoun is produced exclusively from a single estate in Rashaya el Foukhar village in South Lebanon. The Maalouf family, under the expert custody of Ghayth Maalouf, have owned and cultivated this land for generations, and bring a time honoured mastery naturally organic extra virgin olive oil.

Kassis Co. was established with the sole aim of producing and importing fairly traded, organic and craft Lebanese goods – and in particular supporting farming practices that revive traditions of balance and harmony with the pristine environment of rural Lebanon. 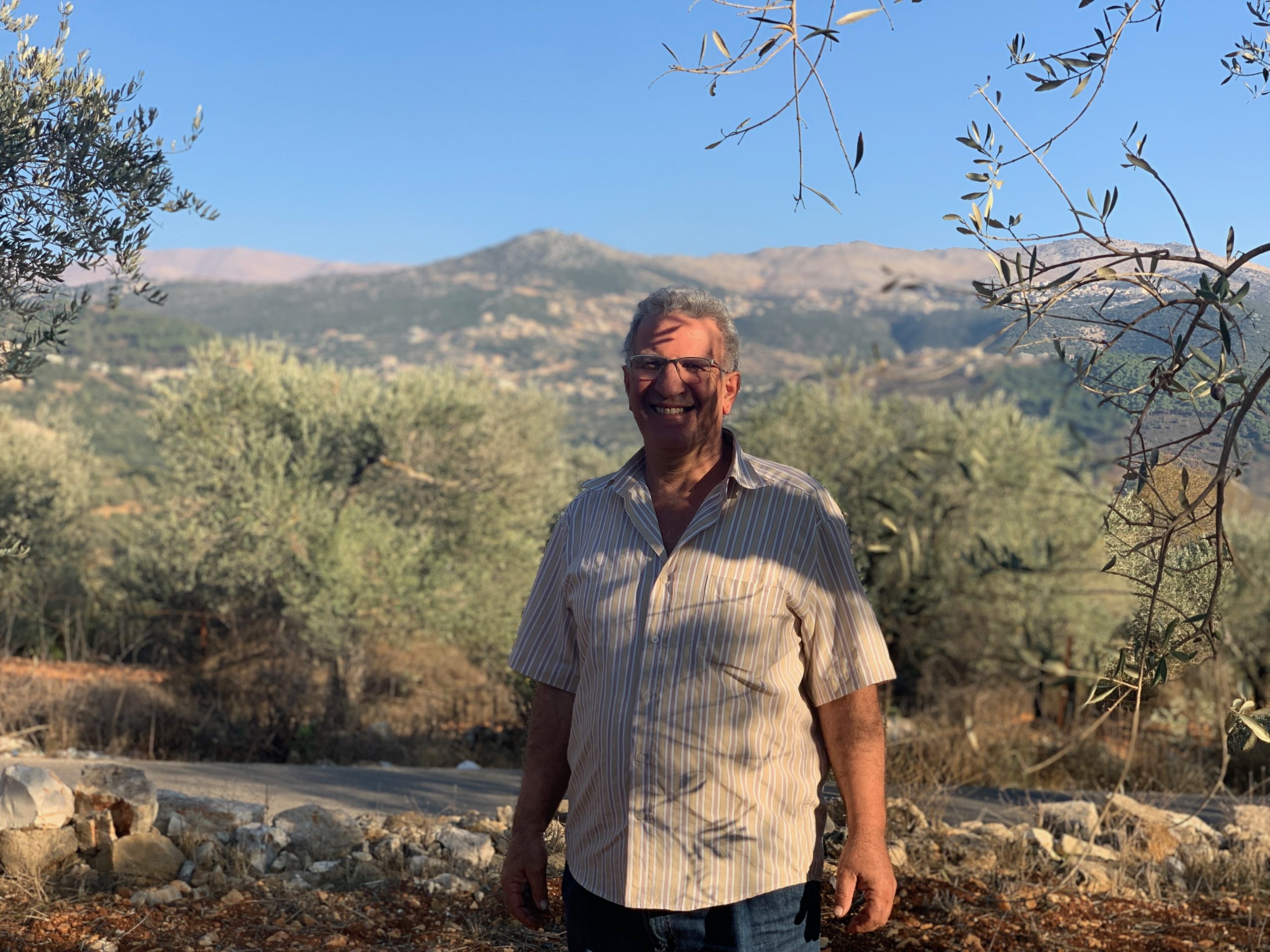 ‘Ghassan had explained to us the challenges of farming in the South. Restricted movement of labour amid bubbling political tensions in the Golan Heights meant the traveling borderless nomads who usually provided seasonal labour were no longer visiting, and uncertainly prevailed. He wasn’t even sure we would be able to harvest that year. Not a good start to an olive oil export plan. A good challenge ahead, by the time we reached our home in Beirut, Rayan had called Ghassan to plan the years harvest, re-license his organic status, and begin the journey to export Lebanese olive oil back to the UK.

Perhaps this is one of the reasons I am so excited to see Haramoun in a shop or on a table in London. Not many have the privilege of standing amongst the magnificent, pristine, and serene mountains that straddle the fault line of human conflict in Lebanon, Syria and Israel – not to mention produce a world class extra virgin olive oil from its beautiful hills. And to know the hardships that it takes to produce organic extra virgin olive oil, and export it to the world against all odds – makes this moment so special.’ 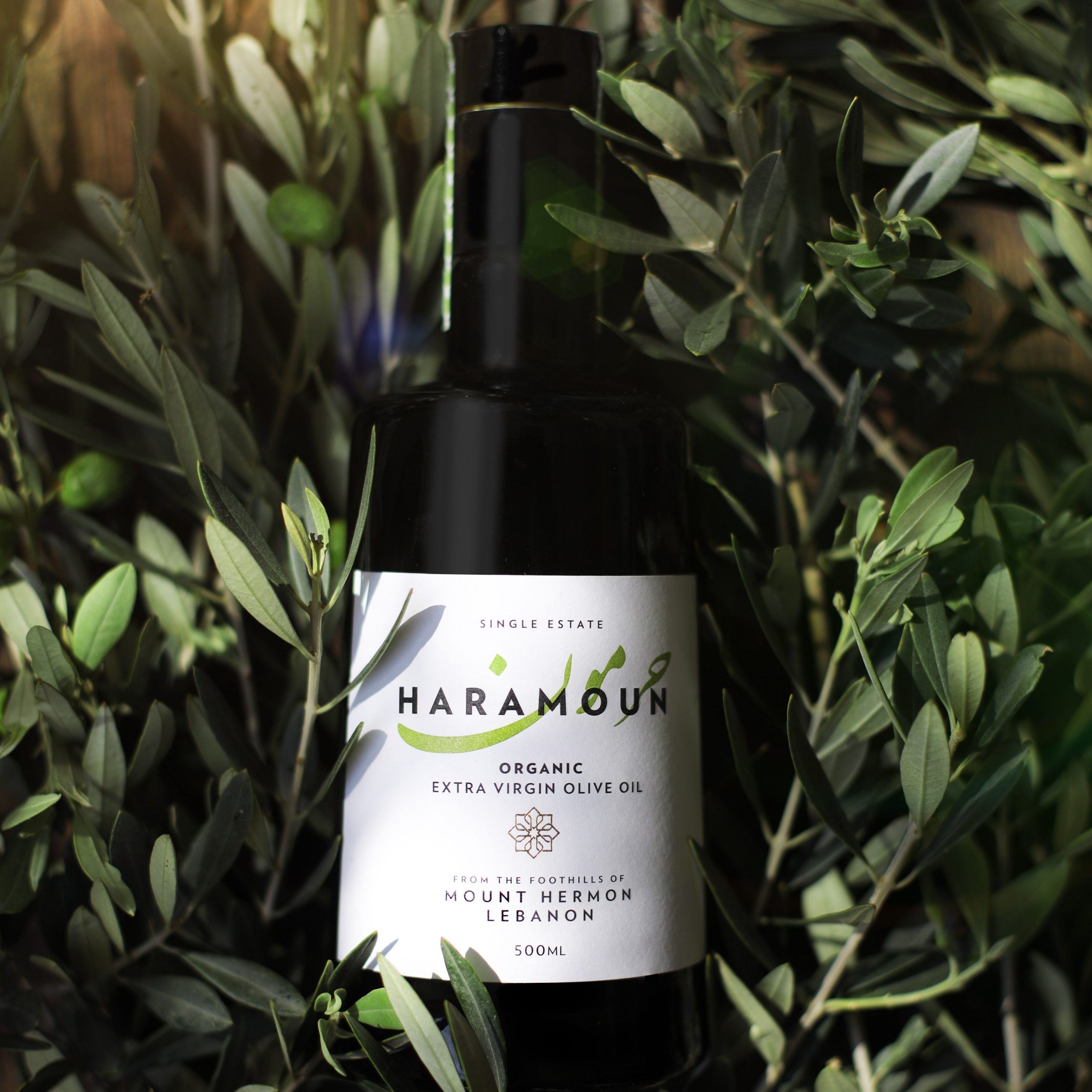 It’s also worth mentioning that amazingly, 10% of each bottle sold at Haramoun goes to charity to support families whose homes have been damaged or destroyed in the August 2020 Beirut disaster via Impact Lebanon.

To find out more about Haramoun visit the website here, or to purchase a bottle click here.